Don’t you know yet? It is your light that lights the world 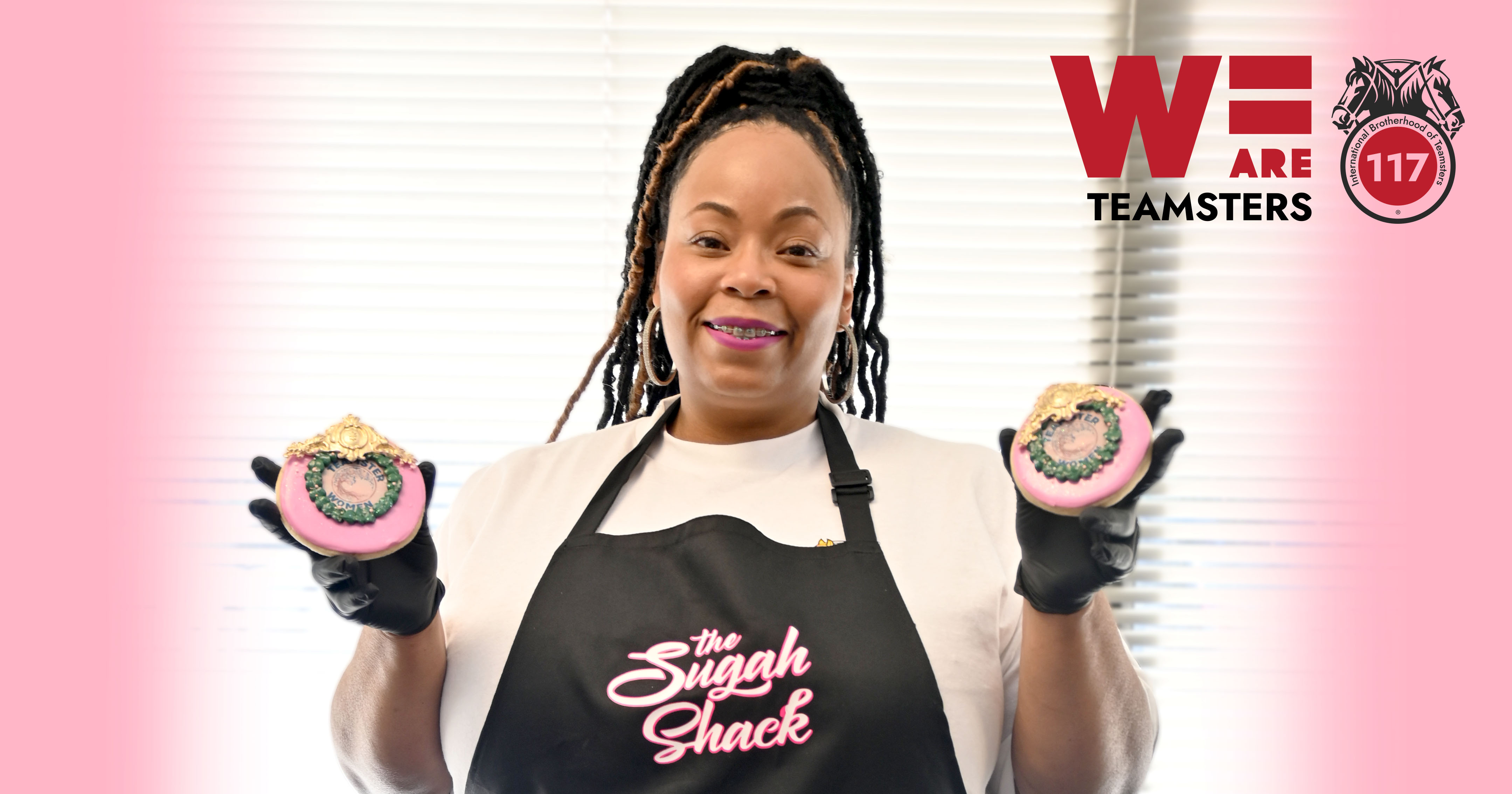 What do Jamal Crawford, Chris Brown and John Legend have in common?The three of them were smitten by edible masterpieces created by a Teamster and “The Sugah Shack” owner Trenita Harris.

A baker/cook at King County jail by night and an artist creating beautiful cookies, cakes and everything in between by day, Trenita is a powerhouse in the kitchen as she is in her union. At her workplace, she is a shop steward and a leader.

Trenita works the night shift supervising a team of 6 incarcerated individuals in the kitchen. Together they prep meals for the entire population of King County jail in Seattle. To her fellow Teamsters at King County, Trenita is an invaluable resource as a Shop Steward. On top of that, she runs her own catering business "The Sugah Shack".

After attending the Teamsters Women’s Conference this September, where she has marched along with a thousand of her union sisters on Amazon, we sat down with Trenita for a conversation about how she does it all.

("Don't you know it yet? It's your light that lights the world" is a quote by Rumi, one of Trenita's favorite poets.)

What does your day in the KC jail kitchen look like?

It’s a Zen zone. I come into the kitchen and set up all the supplies. I like to start with a quote of the day, something inspirational my crew can look forward to. Usually, I pick a quote by Rumi or Confucius. Today it was was: “The only way out is through”. After that, I give out assignments.

We create all the baked goods for 1500 people who are in the Seattle  jail, and we cook the dinner meals for the officers. We also help prepare for the morning shift. It’s really not my job to do that prep, but I know what it’s like to arrive in the morning and nothing is prepared while the first meal has to come out in an hour. It can be a thankless job, but me and my crew just do it.

How do you walk the line between the compassion you feel for the incarcerated people you work with and concerns for your own safety?

I don’t have fear like you might expect. If the vibe is off, I let the officers know. Many of these people come from the same neighborhoods as I do. We went to the same school and played for the little league team. I know what it’s like, I could easily be that person. It just happened that when I went left, they went right.

In my kitchen, I rarely have fights. We have a pretty cohesive crew, and I rarely have people who don’t get along. There is no need to be authoritarian on my part, or abandon something as simple as saying “please” and “thank you”.

Given that you don’t set the meals at your job, if you were to make a treat, what would you cook?

The menu is rudimentary and always the same. We bake homemade rolls from scratch every Sunday, cornbread and chocolate cake, gallons of hot cereal. For my crew, I cook really nice things. They only get paid 50 cents a day, so I feel like the little incentives that I can give them go a long way.  I try to use more ingredients and real meat in the special meals that I make for them. Tonight, for example, I made lemon pepper chicken with mac and cheese. You have to get creative with the bare minimum of ingredients.

The world really rests on people like you, those people who go the extra mile. Where do you get that kind of skill and motivation from?

I was raised by a single mom, so there were no excuses. She needed help and the house was not going to clean itself. She worked full-time and went to school full-time. At the same time, she had 2 kids. You had to grow up fast. If it’s dirty – clean it. If it’s on the floor – pick it up. And if you are able to do it, why not?

A weddings, a kids party, a Bar Mitzvah, The Sugah Shack can handle it all.

In addition to working in King County, you also run your own catering business “The Sugah Shack”. How did you get into that?

I’m a chef by trade, I’ve been cooking since I was 17. I went to culinary school, cooked at restaurants all over Seattle and catered for what seems like forever. When I started taking on more private clients and celebrity clients, I leaned to desserts and then it kind of took over. I had to teach myself since I didn’t go to school for pastry. I practiced and failed at it until I got it right. I don’t have to advertise my business because people take pictures of what I create, and then I get all these requests. That’s how “The Sugah Shack” was born in 2014. It’s physically taxing but also rewarding. I’ve been working double shifts for years.

How did you get involved with the union?

Even not coming from a union background, I must say Teamsters 117 is an excellent union. When I started with King County, all I knew is I had to pay this money for union dues. Then, after several months, my coworkers came to me and said: “You have to be our shop steward.” I didn’t even know what that meant! 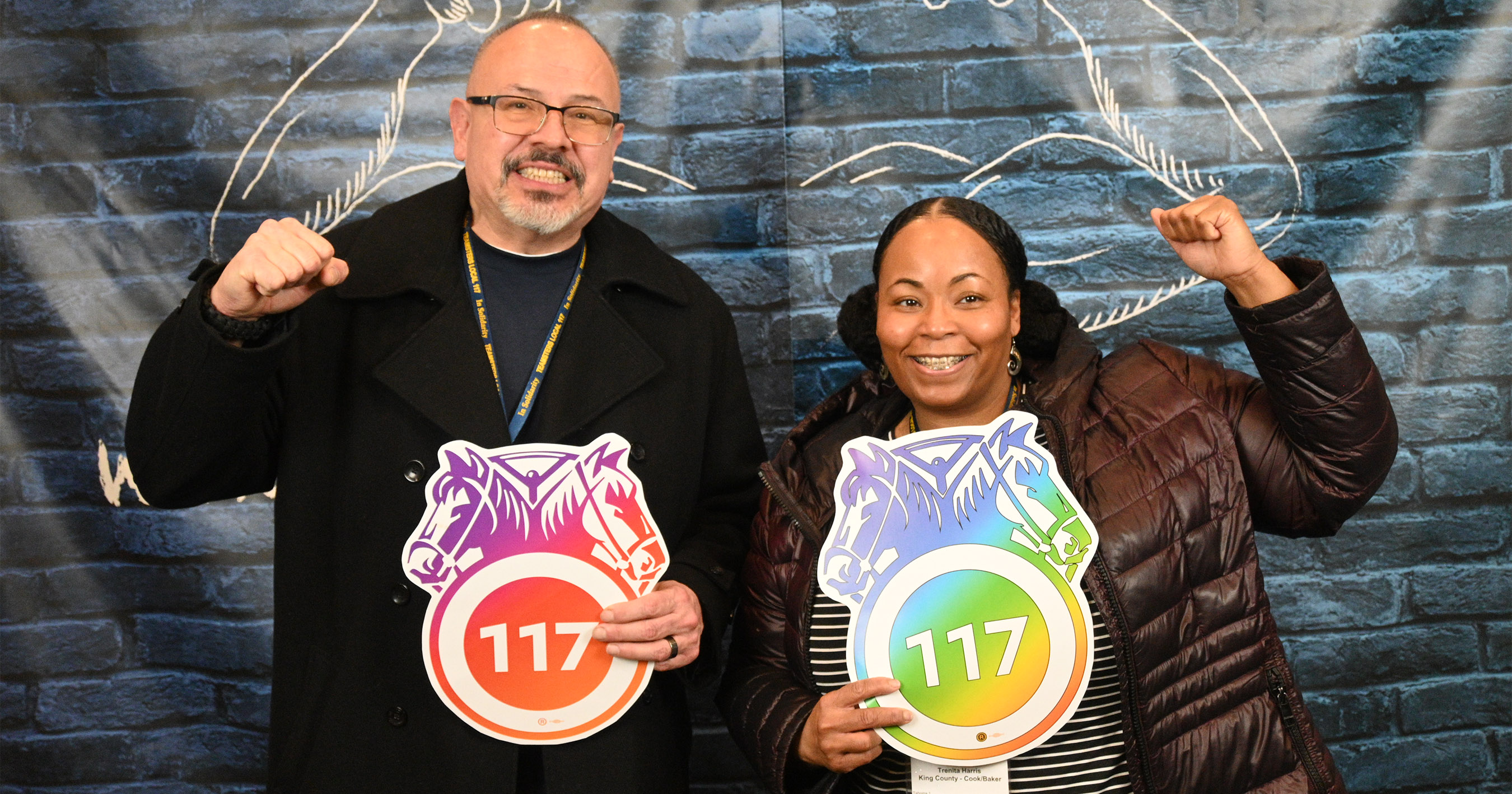 Standing up for her co-workers comes naturally to Trenita. Here, she is participating with a fellow shop steward at Teamsters Shop Steward Seminar.

I’m already getting a sense of why they would ask you, but could you tell me more about why you were selected to be a shop steward?

I was the youngest person in my group at the time, but I was also the only one whose native language was English. My co-workers were mostly Filipino and their native tongue was Tagalog. They could speak English just fine, but sometimes, even if you are fluent in two languages, there are still some barriers. They felt comfortable talking to me and having me help them with the documents.

You and your co-workers were not represented by Teamsters 117 when you started working at King County. How did the change happen?

We were not happy with our original union. At one point, I remember thinking: This is not working. I knew we had to be in a union because otherwise our jobs could easily be replaced by contractors, so we needed to be protected, so I started doing my research. I looked at every union here in Washington and emailed Teamsters. I was reached out to right away. That’s how I got us to Teamsters 117. Now I feel seen and represented. Cara, our rep, knows us by name and knows the contract inside and out. She’s awesome!

What’s your hope for the future?

To be happy and rested. I’d like my business to be thriving, but wherever I go, I’d like to be a Teamster!